“The Lord is in His holy temple. Let all the earth keep silent before Him.” With these words, Dr. Ernest Holmes opened the first service held in the Founder’s Church sanctuary on Sunday, January 3, 1960. According to Dr. Hornaday, this service marked the realization of a vision long held by Dr. Holmes to “have a great temple rise representing all of the churches of Religious Science, but representing, too, all peoples and all faiths.”

The vision actually was born more than a decade before its realization. A sketch was found in the Archives dating from 1947 of a round church to be built on the site that Founder’s now occupies. Why it was not built then is not known. It is speculated that the post war residential building boom may have made materials and workers in short supply.

Ernest’s brother, Fenwick Holmes, in his book Ernest Holmes, His Life and Times, states that after the death of Ernest’s wife, Hazel, in 1957, there was “every evidence that Ernest began his preparations for the closing of his ministry.” Only a few things remained to be done. One of them was the building of a sanctuary and the sanctuary was to be called Founder’s Church. According to Fenwick, Ernest visualized many of the details: “Prior to the ground breaking ceremonies he could be seen spreading out newspapers on the site to demonstrate the placement of various parts of the church, the choir loft, the pastor’s study, the organ to be named after Hazel, and the walled gardens around the building. ‘What we raise here will be beautiful’; he affirmed, ‘it will bless people of all faiths just to see the building.’” 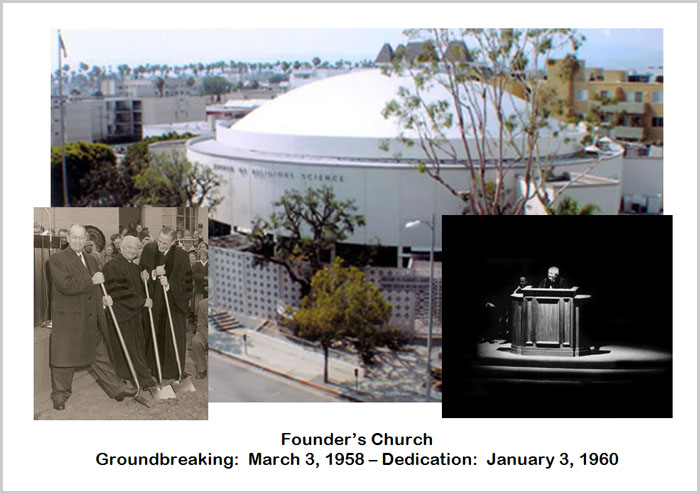 In several lectures he gave at the Wiltern Theater, he spoke of the proposed sanctuary as “a magnificent symbol of our spiritual convictions; a thing of beauty forever.” He also said, “We are building a round church to symbolize that our arms embrace the whole world…the essence is universality; the pattern oneness.”

Ernest did spiritual mind treatment for each phase of construction and then went back to the Institute to do fund raising for the completion of Founder’s.

Ernest had a particular interest in symbology. He felt that architecture, art and poetry contained symbols that could refer the mind back to the perfect pattern of Spirit. He had collected, over many years, 102 different symbols that he felt could be associated with Truth. These he had entered into a design for a mural for the choir wall of Founder’s Church to be titled “The Wisdom of the Ages.”

When the day of dedication came, Ernest called himself “a sentimental old fool” because tears came to his eyes when he took his first peek into the completed sanctuary. He gave the first sermon himself. In it he said, “We are consecrating this beautiful, this magnificent edifice to the teaching, in simplicity but with profoundness, that every man has access to all the Power that there is, to all the Presence that there is, to the only Life that there is and that he discovers the only God that there is in the secret place of the Most High, within himself.”

This, then, is the legacy of Dr. Ernest Holmes to Founder’s Church.