The Legend of the Three Trees

In the book Your Aladdin’s Lamp, Dr. William H.D. Hornaday relates a story that happened at the beginning of Founder’s:

“…here at my desk in Founder’s Church…I can look across to the glass partition which separates my office from the “Meditation Garden” and see a thriving tree which Ernest once rescued with the Word – a demonstration which I witnessed with my own eyes.

Amid the ferns and shrubs of the garden three small trees had been planted; two of them flourished, but the middle one languished from the beginning, lost its leaves and, the gardener reported, died. Early one morning Ernest and I were here in the office planning the dedication service when the gardener came through with a spade. He apologized for disturbing us. 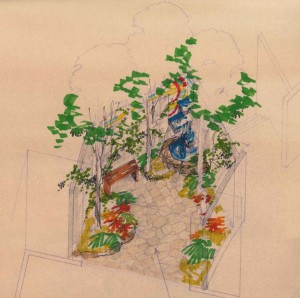 Ernest abandoned the conference and followed the gardener into the garden.

‘Now hold on!’ Ernest said, examined the tree and addressed it directly. ‘How will you ever find a better spot than a meditation garden?’ he demanded, and proceeded to talk things over with the tree almost as if it were a heedless adolescent.

The gardener grinned in embarrassment.

‘Did you plant it carefully?’

‘Well, then, it’s going to be all right.’ He told the tree to count its blessings! ‘There’s love here,’ he explained. ‘Everybody’s been pretty busy getting ready for the opening service, but you mustn’t think you aren’t admired.’ Then he made a long silent affirmation. ‘It’ll do fine now,’ he assured the gardener. ‘Leave it alone.’

Flash forward some 45 years and the three Ficus trees, that was their genus, had grown into three forest giants occupying a 10 foot by 10 foot space, the size of the Meditation Garden off of the Sr. Minister’s office at Founder’s.

Ficus trees are a type of fig tree. They are popular as small ornamental trees in gardens, but it is seldom taken into account the room they need as full grown adult trees or the invasive nature of their root systems.

Now, Founder’s was faced with a difficult decision: the legendary Three Trees had to be removed. The Board contracted with a reputable arborist to do the job.

A couple of years after the removal of the Three Trees, the following conversation took place during a Board meeting in the Sr. Minister’s office:

“Why are we still getting bills from the arborist?”

“One of the trees keeps sprouting no matter what they do to it.”

“The one in the middle.”

“That’s the one that Ernest Holmes prayed for!”

Most of us are familiar with the parable of Jesus and the fig tree, [Matt 21:19], that when he came upon a fig tree that had no fruit he commanded it to never bare fruit again and the tree withered away. This was to instruct the Disciples on the power of the Word spoken in faith. It also carried the lesson that everything must serve its proper purpose.

Ernest Holmes also demonstrated the power of the Word spoken in faith when he healed a withered fig tree, but Ernest’s additional lesson is different: no matter what the appearance you can still achieve your full potential!